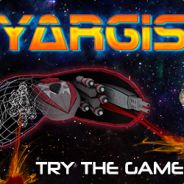 We will announce big multi-player games and crown Yargis champions :)

Yargis is a pilot for the Earth military in the year 3013. Despite having explored far beyond Pluto and Alpha Centauri, no contact with alien life has been made. Until now. An unknown species only known as the Mukka are attacking Earth and its inhabitants. It is up to Yargis to defend Earth and help uncover their fiendish plot while trying not to get blown to smithereens.