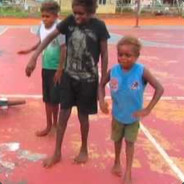 Nyirrpi is a remote Aboriginal community of approximately 250 people located about 440 km from Alice Springs. The community is traditionally the home of the Warlpiri People and includes Pintubi, Luritja and Kukatja speakers.

The Nyirrpi population is remote, marginalised and under resourced. These conditions make it difficult for people to access employment, higher education opportunities and advanced health services.


Background of the song:

This song was recorded in March 2011 on the 1st day of our workshops in Nyirripi, NT. Funded by InCite Youth Arts & Mt. Theo, these sessions were run by Monkey Marc & myself. Monkey Marc produced the beat & edited the shots for this clip, which turned out to be one of the big disco hits of the community during the 4 weeks we spent there doing songs. Tho Monkey & I conducted a story board session with the youth who sang on the track, when we tried to gather with everyone the next day, none of the mob we'd planned the clip with the day before, were in town. Fortunately, some other Nyirripi youth 'picked up the ball' & were keen to see the clip thru.